“I have a sort of sea-feeling here in the country … My room seems a ship’s cabin; and at nights when I wake up and hear the winds shrieking, I almost fancy there is too much sail on the house, and I had better go on the roof and rig the chimney.” – Herman Melville, December 1850 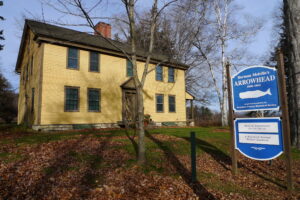 Arrowhead and the Berkshires inspired and nurtured Herman Melville. In 1850, Melville impulsively purchased the Brewster farm of 160 acres. Named “Arrowhead” after the artifacts found in the fields, the old farmhouse was soon filled with eleven members of the Melville family – Herman and Elizabeth, their four children, Herman’s mother and several sisters. It was a busy, chaotic household. 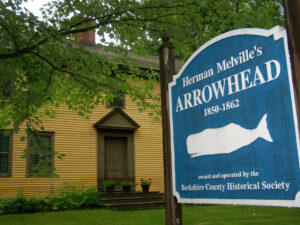 Herman created a refuge from this chaos in his second-floor library. Keeping to a regular writing schedule, he completed four novels and many short pieces. The works Melville wrote at Arrowhead included Moby-Dick, Pierre, The Confidence-Man, and such short stories as “I and My Chimney,” “Benito Cereno,” and “Bartleby the Scrivener.”

The view of Mount Greylock from Melville’s study window was his inspiration for the white whale in Moby-Dick. He dedicated his next novel, Pierre, to Mount Greylock. His short story, “The Piazza,” begins at Arrowhead and takes a magical journey to the mountain.

Melville lived, farmed, and wrote at Arrowhead for 13 years. Although he was writing his best work, he was not making a living. As much as Melville loved the Berkshires, he grew frustrated at the lack of success of his writing career and found his debts mounting. Pressured to find gainful employment, Melville decided it was time to move his family from his beloved farm and return to New York City. There he found work as a customs inspector at the New York Customs House, a job he held for over 20 years. The man who had sailed the world and written the greatest of American literature now found himself confined to a job that paid four dollars a day. He died in 1891. 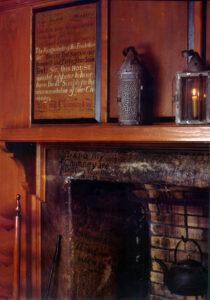 Melville sold Arrowhead to his brother Allan who used it as a summer home. Melville continued to visit Arrowhead through the 1880s. The Melville family owned the house until 1927. In 1975, the Berkshire Historical Society purchased the house and began its restoration.